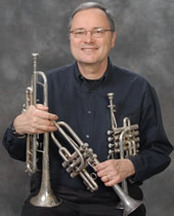 Dr. Michael Galloway
Dr. Michael Galloway is the trumpet professor and director of jazz studies at Mansfield Unversity.  I have worked with him only a few times over my high school career, but he has had the most impact on my musical growth!  To me, he is an amazing educator and is absolutely outstanding because of his energy, teaching techniques, and his wild personality!  After a few times we had worked together at various music events, I had scheduled a lesson with him at the University.  During the lesson, it was clear to me that he was passionate, and that he truly believed WHAT he was saying as an educator!  I also slowly understood that music was not just an ear game, but also a mind game.  He was the one teacher that had me start to look at music through a different view.  He taught me that, I am my own teacher, and that if I just think differently, my playing would change for the better.  Overall, his philosophies, lectures, rants, and crazy stories made me a better musician, believe it or not.  His random stories in the middle of rehearsals were the best, and yelling his catch phrase, “Shoot man, Shoot!” was always enough to make the band laugh.  He has taught me a great deal about this thing called music, and I hope to learn a few more words of wisdom from this fantastic educator! 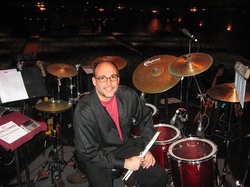 1.  What brings you the most joy in your job?
When I asked the first question, Bobby was quick to say, “Watching the kids succeed!”  He enjoys it everyday, we he sees his students finally get it! “Making music, ya know?  Its all good!”

2.  What do you wish you did more of in your undergraduate experience to prepare you for your current job?
“Piano.”  Bobby made it very clear that piano was one of the biggest things he wished he could have made more of an effort in.  He accomplished all of the minimum requirements in school, but he wished he had minored in piano.  “Piano is an important part to music.  Anything that was lacking in my music career would have been piano.  Maybe not in my undergraduate studies or in high school, but if I had taken lessons before, it would have helped.”  He didn’t have a big problem with theory, but the piano skills would have helped with everything as a whole, and also his guitar skills.  Bobby went further into detail on how guitar has the same effect as piano skills.  He has been teaching kindergarten through third grade for 12 years, and guitar accompaniment has helped him along the way.

3.  Do you hold piano skills and guitar skills on the same level?  Should one be more developed than the other?
“Piano and guitar skills are at the same level.  You can end up teaching guitar, and accompanying students with both guitar and piano;  two important components that help teaching kids - and guitar is especially popular.”  He began to explain how he uses his guitar in the classroom, teaching kids chords then having the kids play and sing songs.   “The goal is to teach kids that music is a life long learning experience.  You want to expose kids to music, and teach them to enjoy it as they get older.”  He started to narrate to me about a current student of his was never in band, or related to music, but when he started to play the guitar, it just made sense to him.  He bought a guitar, and is playing quite well in class.  The student loves the new discovery, and his father is thrilled that his kid is into it!

4.  What is some of your educational background?
He earned his undergraduate degree in Music Education at Mansfield University and is currently Bobby teaches the middle school students in Loyalsock Township School District.  He also talked about being a featured percussionist on the Empire Brass’ 1992 and 1993 tours of Japan, as well as the Telarc CD “Empire Brass - On Broadway.”  He started to go more in depth with the Japan tour:  “Playing music at the level is just . . .”  There were no words to describe his reaction to the question.  (In a good way, of course)  He said the crew did many tours in Japan with many of masterclasses, through interpreters, since there was no one who spoke English!  However, he did mention that the connection to the students was great! “The kids had so much respect for you; they were like sponges.  They were all eager to take advice to try and get better.  It was like they were saying, ‘What can I do, what can I do?’ ”

5.  Did that experience help you develop new ways to teach your students back home?  How so?
“The kind of attitude they had, gave me those insights on how to get the kids excited.”  He explained that it also made him a better musician to do that, to try to inspire his students.  He went into detail on how the tour also established some connections, where he was able to bring in a lot of artists as special guests at his school.  “Its important that kids have inspiration.  Model what you want them to do.”  He began to explain that many band directors do not practice their major instrument or perform.  The further they teach in their career, the more they lose their whole inspiration.
“As an educator, you need to keep up with your craft.”  He started to explain his situation - that he doesn’t listen to classical music like he used to.  He played in major symphonies for 28 years, and performed many classic concerts and loved it, but he doesn’t listen to it as much now.  Though once in a while he does, and performs all over the place, all the time.  “It keeps me sharp, and in tune with it.  Its a whole different animal than jazz, rock, or even country.”

6.  What professional development opportunities do you suggest that would be most valuable to me now or in the near future?
“Technologies - Districts are really pro technology!”  At his school, the music department had a technology day, where viaAcademies (an online music school)  came and explained different types of music education software.  There were many different types of learning tools for the classroom.  “I use Smartmusic every day - in lessons especially.  I used it today!”  He explained that using the software inspires kids, and gives them confidence because they do not have to play completely by themselves - mostly.  It also gives the students a performance type experience.  “Technology is definitely one way to go for professional development.”  He also added that other professional development opportunities are all types of performing.  He began to explain that when he did his tours in Japan, he never had to give up his teaching job.  He took a “leave of absence” for professional development, which he learned so much to inspire kids as stated before.

“Its not all about teaching, its about trying to teach kids life long learning experiences.”